Both democracy and health care have something in common…their price is eternal vigilance.  One of the big shifts in my medical life has been the realization that I am my primary health care provider.  Yes, I have many resources around me, various physicians, the internet, support groups, books, etc.  My physician is one of these resources. This is different from days of yore pre-internet, and pre support groups.  In those distant days, we kowtowed to the physician who was the unquestioned authority.

Feeding the realization that I am the primary person is the realization that my motives are pure. I focus only on my health.  The medical system that we have created in the US has been contaminated by money.  Most of the doctors I have encountered strive to rise above this, but it is hard.  For example, if your hospital has invested in an MRI machine, could there be a tendency to overuse it?  Our litigious society further complicates the equation. What goes through the poor doctor’s mind is, “ if I fail to do this test, and later the patient has cancer, I could be sued, or even lose my license“ I can’t imagine the pressure they must feel. 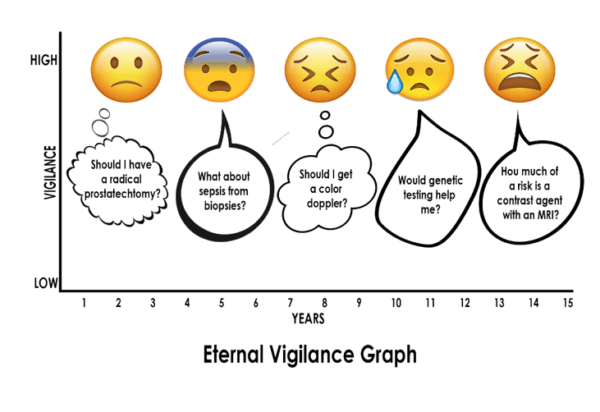 All of us, physicians, patients, and caregivers need to be aware of this migration towards patient empowerment.  We as patients need to embrace and thrive in this empowered age.  Physicians need to recognize this change in many of us and be a player on the team.  We patients may at times feel impatient with our physician as they may be defensive about our proactivity, but they too, like us, are in a gradual process of transition.  Many doctors with pristine motives are crippled by a medical system riddled with legal, economic issues, and hindered by outdated protocols that are often mired in the past.  Most doctors are very good people, but they have no way to escape the Matrix. I don’t have conflict when I am making decisions for Mark. My motives are uncontaminated.

How does this evolution of healthcare play out?  Let me first share my own story.  I have been on AS for over 14 yrs.  The path to choose active surveillance (AS) over 14 years ago was not an easy one as I had 5 medical professionals recommend a radical prostatectomy (RP).  I chose AS —watchful waiting was the accepted nomenclature at the time.  The recommended approach, and gold standard at the time was an RP and I spent some fruitless time and effort second-guessing my refusal.  Those around me thought I was a bit nuts for my choice.

Now 14 years later, there is no doubt in my mind nor the medical systems’ mind that I made the correct choice.  One of the doctors who recommended intervention was courageous enough to admit that he would today have recommended AS. That choice empowered me.

Along the way, I had doctors recommend biopsies as that was the standard of practice to monitor PCa.   I was concerned about sepsis (approximately 3% of biopsies result in sepsis).  I did my usual risk/benefit analysis, and since my PSA wasn’t rising, I refused and have not had one for over 13 years.  Magnetic Resonance Imaging (MRI) is now viewed as the better protocol.  That decision to refuse biopsies further empowered me.

My latest challenge has been to deal with the current protocol calling for an MRI with a contrast agent.  I now have seen studies showing evidence of possible heavy metal deposition from the contrast, so after a long back and forth I chose to refuse the contrast.  I have heard that Woman and Bingham’s in Boston and Memorial Sloan Kettering no longer use gadolinium to monitor PCa.  My urological oncologist initially fired me over this dispute, concerned that the image was not good enough.  However, he called back, and I guess I have been rehired.

Originally, they told us that drinking fluids would eliminate all harmful contrast material.  As it turns out that is not true.  What seems to happen is that when the experts don’t know, somehow it seems to stretch into “don’t worry.” Why couldn’t they just say prior to the MRI something like, “there is a lot of controversy now over the use of gadolinium as a contrast agent?”  We don’t yet know for certain if there are long term side effects.  “You may want to research further.”

Why not have an informed consent form? I have often seen in my own case, a failure to be provided adequate notice regarding side effects. By the way, I never received notice from my health care provider of the risk of heavy metal deposition.

Another alternative might be to pick up on the Preventive Services Task Force approach re PSA calling for shared decision making.  Why not have the decision about the use of contrast be discussed with the patient, so both the doctor and patient are fully informed?

Nor does this notion of vigilance apply just to the medical system.  I recently went to the dentist after my tooth fell apart.  He said I would need to have an implant.  Not a simple procedure and with a cost of around $4,000.  I felt there was enough tooth left, so I went to another dentist who put a crown on for $1.000, and I still have the original tooth. I was once again rewarded for my vigilance.

The point here is that each time we make a decision that honors us and our informed opinion/intuition, we are empowered.  It is when we choose to not do our own research and connect with our own guidance system that we suffer.  Doing the research includes extensive reading, discussions with your doctors, sharing your situation with support groups like ASPI, PCRI, Malecare, Answer Cancer, Inspire Community, etc.

Twenty-five years ago, when my father was diagnosed with PC we relied totally on the doctor.  The final 6 months of his life were destroyed by over radiation, castration and generally overly aggressive treatment because the doctor was our only source. The system snatched away the life of a good man who was vibrant and alive prior to his ill-fated treatment.  As an attorney, I had thought about suing, but that is not the way I am wired.   Some of you may relate to the medical system as we did 25 years ago.  Today you are empowered and no longer need to be in that place.

The side benefit of my bucking the system has been no side effects, no erectile dysfunction, no incontinence, no risk of sepsis, and no heavy metal deposition on my already forgetful brain.  An additional side benefit is that I have saved the medical system much money, by not over intervening.

Choosing to empower yourself requires much work.  If you are not fascinated with the evolvement of health, it may not be for you.  If it is, you will live life without regrets. The price of your health is eternal vigilance. Not a price beyond your grasp.

Mark has been on active surveillance for over 14 yrs.  He is a cofounder of Active Surveillance Patients International.  He also is involved with the Prostate Cancer Research Institute.